Josh went down like a ton of bricks last night with the flu and had a really bad night. He woke several times during the night crying telling me not to touch his head and when I asked him whah hurt, he had already counted them - '4 things hurt, my head, my knees, my tummy and my ears'. Poor little man. He kept asking me tearfully 'will you after me Mummy?' - I am such a sook when my boys are sick.

Trip to the doc first thing and he doesn't have anything obviously bacterial, so it's all the usual while he shakes what the doc thinks is a bad case of the flu. I just want to wrap him in cotton wool and cuddle him. Samuel of course doesn't understand and we have had to intervene at various times today to prevent him walking on Josh' s head, bashing him with toy hammer and just generally p*ssing him off, LOL.

Gotta go - Paul has interview tomorrow and needs the puter. Here's a happy snap of my little darlings I took Tuesday morning when they were piled into my bed. Man I love these boys. 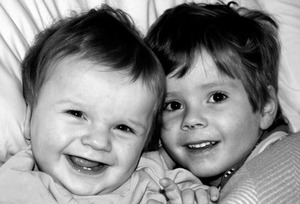 I hope things will be better for you tonight Claire..

Tat pic of the boys is good. They are both soo happy and it is so rare to get a pic like that. Can't wait to see it scrapped.....

What an absolutely gorgeous photo. What camera do you have?
I hope that your boy is better now. Just too many virus' around lately.

This is only a preview. Your comment has not yet been posted.

The letters and numbers you entered did not match the image. Please try again.

As a final step before posting your comment, enter the letters and numbers you see in the image below. This prevents automated programs from posting comments.

Having trouble reading this image? View an alternate.

(Name and email address are required. Email address will not be displayed with the comment.)